Transcript:  It’s called the Super aEgis 2 and its one of the most advanced weapons systems ever built.

Billed by its manufacturers DoDaam of South Korea as a “Total Security Solution”, the Super aEgis is an automated turret system that supports a variety of weapons, from a standard machine-gun to a surface-to-air missile. It is designed to repel an attacker from up to 3 kilometres away, using sophisticated thermal imaging software and camera systems to lock onto a human-sized target even in the dead of night.

“We have certain circumstance where North and South Korea are confronting each other and currently soldiers are operating a lot of military equipment. If the job can be replaced by non-human guarding and monitoring robots, it could reduce the number of labour forces and military forces. And it could also reduce human losses under real combat situations.”

It’s not yet clear though, whether the Super aEgis 2 will be deployed along the border. The 60 year old Armistice Agreement between North and South Korea specifies limits for the weapons each side can point at one another. The super gun’s presence may never be known, unless or until it starts firing. 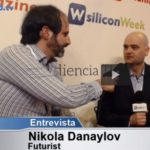